There were once a husband and wife who were always quarrelling and fighting with each other. The man would come home from a stressful day at work, and would expect everything to be right at home. He would come in all stressed out, and as soon as he saw something wrong he would start having a go at the Mrs.

The lady, being the warm blooded type, would talk back at everything he would say, and would just be a rebel and keep responding to the mans abuse with more abuse. In bengali we would say that the lady had very ‘lamba zifra’ (i.e a very long tounge) and she was also the ‘Rog Thera’ (broken vein) type.

Anyhow, they would argue, the man would swear, she would talk back, and eventually he would get angry and slap her. This happened for quite some time, and the woman was getting pretty frustrated at having to take a few slaps every night. So she decided that she needed to get help.

She thought the local scholar would be the best person to go to. She went to him and told him of her ordeal. He listened attentively and then when she finished, he asked her to re-iterate whether she would talk back when the husband would order her to do something, or tell her off for not doing something. She affirmed that she does talk back, and shout abuse back at him.

The scholar then thought for a while, and realised what the problem was. Here is a man, that is working in a stressful job, and has also got a wife and kids to look after, and is probably under a lot of pressure and tension. He comes home from work, and is not very good at controlling his stress, so he takes it out on the wife.

And then you have a wife who has a big mouth. When the husband comes home, he expects to come home to a peaceful home, and a place where he can come and wind down from a hard days work. But all he gets when he walks in, is nagging and the wife talking back at everything he would say.

So the scholar thought, they have both got to be taught a lesson. The wife has to learn to be nice to her husband, and to be patient when he is a bit high tempered. And the husband has to learn to appreciate his wife, and all the good things that she does for him and the family.

So he said to the wife, I will give you some blessed water (‘Fani Fora’). Every time the man is at home., put this water in your mouth and do not spit it out until he has gone out of the house. Do this for some time and then let me know of the outcome.

So the lady, not understanding how the ‘Fani Fora’ would solve her problem, took the bottle of water and went back home. That night, when the husband returned home from work, she immediately put the water in her mouth, and went on with her chores.

The husband started the usual racketing, but the wife could only listen. She was unable to talk back as she had the water in her mouth. So the man went on at her, until he got tired. But he was surprised at the fact that she didn’t say a word back to him. The wife was just following the scholars orders and keeping the water in her mouth. But because she did not respond, the husband did not hit her at all that night, and went straight to bed.

She thought to herself, ” wow the water is working, he didn’t hit me tonight ” not realising that it’s not the water doing the trick, but the fact that her mouth has been shut all evening.

The next morning the man got up and went to work, and the woman was all happy getting on with her daily duties. Again in the evening the man came home, and as soon as the wife heard him come in, she ran into her room and put the water in her mouth. The man, was a little less abusive, but continued his shouting at the wife. Again he noticed that she wasn’t responding. She would make his food, give him the plate, and do all the things she would normally do, but would not say a word to him. Again the man, said a few things, but then got tired and went to bed.

This cycle of him coming home, and the wife putting the water in her mouth, and then him shouting abuse, and her not responding went on for a few more nights. And as the nights went on, the man started getting more and more worried. He could not figure out what was wrong with the wife. And now he was really concerned. After a few more nights, he got really worried and decided to seek some counseling. So where does he go? Coincidentally to the same scholar that his wife had been to.

The scholar, knowing who the man was, pretended that he did not know him and did not mention that his wife had been a couple of days ago. So as usual he listened to the mans problems and asked him some questions. The man told him that his wife has not been speaking to him for the last couple of nights and he can’t figure out what is wrong with her. The scholar asked the man what he would do when he got home from work, and the man told him that he would be very stressed from his day at work, and he would take it all out on the wife. So the scholar said, you see this is what the problem is. When you come home from work, your wife expects you to show her some love and care, and for you to be nice to her and to treat her well. Because you walk in like a lion on fire, you end up arguing and then having a fight with her. She must have gotten upset at your fighting that she has decided not to speak to you. So the man asked, what can I do to sort it out.

So the scholar said that he had to change his attitude and actions towards his wife, and be more nice to her and treat her well. The scholar asked him, when was the last time you gave your wife a gift? He said, ages ago, so long ago that he could not even remember. So the scholar suggested to the man, that after work, he should go to the shops, and buy his wife some nice food and sweets, and buy for her some nice gifts, and then take it home to her.

So the husband after work, did as the scholar suggested, and went home with a whole heap of food and presents for his wife. As soon as she heard him come in, she went and put the water in her mouth, as the scholar had told her to do. So them man comes to her, shows her what he got for her, and tells her how sorry he is. She doesn’t say a word. The man begs her all night to forgive him and to speak to him, but she would not speak. She could not speak, even if she wanted to, because she wanted to do what the scholar had told her to do. So the man got upset and fell asleep.

The next morning, them man got up and went to work as usual. He was a little moody and upset, because the wife still hadn’t spoken to him. As soon as he left the house, the wife went to see the scholar. She went and told him what had happened. She said how, never in his life did her husband buy her gifts and stuff, and he did it last night. And she was so happy at what the ‘Fani Fora’ did for her. She thanked him ever so much for the ‘Fani Fora’. She still didn’t realise that it was not the blessed water that helped her, but the fact that she did not talk back to her husband.

So the scholar told her, that look, it’s not the water that did the trick, but the fact that you never said anything back to his abuse. Because you just sat there and listened, he calmed down, and eventually was sorry for what he did. But if you had talked back, then the cycle of violence would have started again.  So she learnt her lesson.

So the next night the man came home, he was still sorry for what he did and learnt his lesson (from what the scholar had told him) and just wanted his wife to speak to him. She also learnt her lesson (from what the scholar said to her). So he spoke to her nicely and he was so happy when she responded. And then they talked about what happened, and told each other how they will treat each other well and behave better towards each other etc.  And they lived happily ever after. 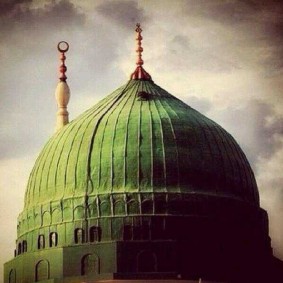